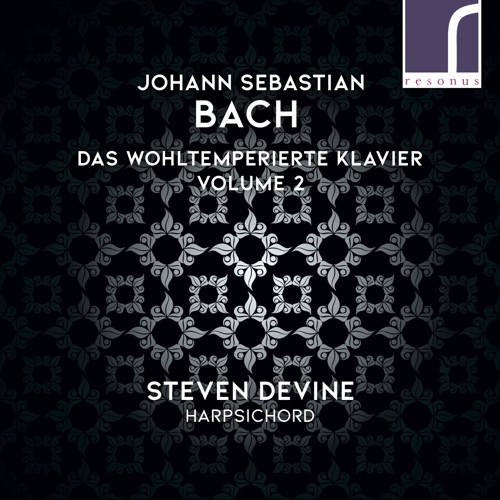 Some twenty years after the collection known as Das wohltemperierte Klavier J.S. Bach assembled his second collection of twenty-four preludes and fugues in all keys, completing one of the greatest achievements in keyboard music that today remains one of the crowning glories of the genre.

Acclaimed harpsichordist Steven Devine returns to Resonus to complete his recording of J.S. Bach’s Well Tempered Clavier, once again exploring this great pinnacle of the Baroque keyboard repertoire on the stunning instrument featured in the first volume – a harpsichord by Colin Booth after an instrument by the eighteenth century maker Johann Christof Fleischer.

“I have been waiting impatiently for Volume 2 to appear, as Das Wohltemperierte Klavier is for me a perfect accompaniment to the periods of lock-down we have experienced. Playing one of these highly individual and characterful pieces each day is a way of articulating the passage of time in a way that helps give shape and direction to life when other bearings fail. I said in reviewing the first volume that Devine’s ‘has a particular seemingly effortless grace, and it’s the one of all I’ve heard in the past ten years that I am happiest to live with.’ Volume 2 confirms this judgement, and the ‘effortless grace‘ – which of course is the result of much hard work and study, and is the very opposite to those recordings which make you sit up and take notice of the player’s ability (rather than the composer’s) – is just what I hope readers will want of a recording that they are going to live with.

This is – and remains with the publication of Part 2 – my top choice for the 48.” Early Music Review

“As to my reflections of the performance, I can do no better than repeat my comments on Devine recording of Book One. I wrote then that –

“This musically intelligent and absorbing recording demonstrates that performing Bach (or any music, for that matter) is far more the merely playing all the notes in the right order. His subtle use of articulation and rhetoric and his understanding of the Baroque idea of building up musical ideas from small motifs make for an absorbing recording that will invite repeated listening. He manages to negotiate that fine line between presenting a personal interpretation and those over-mannered performances that might be fine for a live recital but is usually off-putting on the repeat listening that a recording allows. With obvious respect to Bach and these extraordinary miniatures of musical craft, Devine brings a wide range of interpretations, matching the underlying mood of each Prelude and Fugue perfectly.”” Andrew Benson-Wilson

“As the keyboard cornerstone of the Orchestra of the Age of Enlightenment, of the Gonzaga Band and of sundry other period-instrument ensembles, harpsichordist Steven Devine is a discreetly ubiquitous presence. But he’s also building a reputation as an outstanding recitalist; this completion of his ‘48’ is a highly satisfying account.
Some musicians play up the kaleidoscopic aspect of this extraordinary collection of pieces, but Devine gives it a strong underlying pulse, with emotional restraint; his playing is invigoratingly muscular, his intention with each piece pellucidly clear, often setting the pairs in fruitful contrast.” BBC Music Magazine