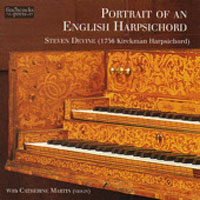 Portrait of an English Harpsichord

From the British Harpsichord Society:
“It is with some shame that even those of us who purport to be especially interested in early English music find ourselves still occasionally coming across a composer whose name is only vaguely familiar and whose music we cannot claim to have heard before. But it is also an opportunity. Steven Devine has done a considerable service in making several such composers better known with his CD ‘Portrait of an English Harpsichord’. The instrument used for the recording is a 1756 Kirckman from the Finchcocks collection, which gives the CD a substantial additional interest. Of the seven composers represented, the ‘ordinary listener’ will probably only know three; yet all are undeniably worth hearing and studying further.

James Nares (1715 – 1783), whose Lesson 1 in G Major opens the recital, is a composer whom, until recently, few listeners beyond specialists would have encountered; suddenly, however, his name seems to be cropping up regularly. Yet few people, even now, are likely to possess any Nares on either paper or CD, so the opportunity to hear his music, rather than just his name, is valuable. A sequence of chords makes an arresting beginning to a generally dramatic first movement, which arguably looks back somewhat to earlier toccata traditions; it certainly establishes the player’s skills in declamatory performance and the considerable power of the instrument. A simpler, very tuneful central movement demonstrates the complementary qualities – a harpsichord that can sing as well as declaim and a performer who can shape a melodic line as well as dash off a run. In short, the listener is likely to be ‘hooked’ before two tracks have gone by. The accompanying notes describe Nares, with obvious justice, as a composer who mixed old and new elements: the second two movements are clearly inclining to the new more obviously and consistently than the first; the finale is perhaps the most ‘classical’ – and so forward-looking – of the three.</p>

Johann Christian Bach (1735 – 1782) will be one of the more familiar names on the list; but his solo keyboard music is not often heard – unlike that of his two famous elder brothers. Stephen Devine has chosen the Sonata Op 5 No 6 in C Minor. The well-known anticipation of Mozart is evident, but there is different interest too in this piece: the use of an ‘antique’ form – fugue – and a notably Italian flavour. The last movement is distinctive and most appealing: the performer leans into the rhythm just enough to point its interest without any exaggeration.

Thomas Gladwin (c1729 – ?1799) provides the first of two opportunities to hear the baroque violin, played by Catherine Martin, in combination with the harpsichord. We become so used to the harpsichord as either a solo or an accompanying instrument, that it is an interesting change in itself to hear the normal roles reversed – violin accompanying harpsichord: the two performers are in such accord as to sound at times almost like a single instrument of a new timbre. Gladwin’s Sonata No 5 in G Major is a pleasant work, sounding at times very Handelian and yet technically – as was fashionable – showing the influence of Scarlatti.

Though the name of Thomas Arne (1710 – 1778) may be very familiar, his keyboard music is probably not. Again Mr Devine has done us a service here, for the piece is likely to surprise listeners by the extent to which it is new and galant in style – and to delight by its quality, particularly the enthralling opening cantabile movement, which is brought out very stylishly here by some gentle play on the underlying pulse.

Joseph Kelway (c1702 – ?1782) contributes the longest piece in the collection, a four-movement Sonata, No 4 in C Minor. It is another piece which might be described as rooted in Handel and influenced by Scarlatti – but by no means lacking in individual character. Again, it is arguably the elastic lyricism of the slow movements – both the opening Allemande and the Largo – that is particularly notable.

The baroque violin returns, now very much in the leading role, for the Sonata No 2 in A Major by Joseph Gibbs (1698 – 1788), another quite substantial four-movement work, which is inventive and places some demands on the violinist: not surprisingly, they are more than met by Catherine Martin. She plays an original instrument, Milan 1745.

Stephen Divine has taken the eminently practical step of matching this largely unfamiliar repertoire with what is probably the most popular piece of English baroque keyboard music: Handel’s Suite No 5 in E Major, which ends with the famous ‘Harmonious Blacksmith’ variations. It is realistic programming not merely because it will sell copies, but for the more elevated reason that a mixture of Handel and others offers the best representative picture of English keyboard music in the period. It is a very controlled performance: by no means relentlessly measured – there are touches on brake and accelerator and some subtle play on rhythm at times; but the ornamentation is discreet. Repeats are usually taken simply as repeats, rather than as opportunities for much increased or varied decoration: when change occurs (notably the repeat of the second section of Double 2), it is especially refreshing. The changing of manuals at speed to alternate forte and piano the scalic passages of the finale is handled with aplomb. The music itself gives an impression of mounting pace, and the performer has chosen to let that speak for itself against the background of a generally moderate tempo.

All in all, this is a CD that neither harpsichord enthusiasts nor English music enthusiasts will want to be without. It has the three essentials: thoroughly worthwhile and interesting repertoire, expert playing that points out unobtrusively the interest inherent in the music, and an instrument of great historical interest restored to peak condition.

“Well recorded at Finchcocks in 2005, it will grace anyone’s collection without duplicating music they are likely to have already, save for Handel’s ever-popular Suite No. 5, the one with “The Harmonious Blacksmith”.  A lovely CD produced to highest standards, with full, elegant documentation; warmly recommended.<br />
Peter Graham Woolf – Musical Pointers