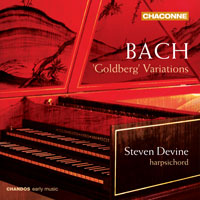 The ‘Goldberg’ Variations by Bach are considered among the most commanding and inspired sets of variations of any period, and one of the most ambitious compositions ever written for harpsichord.

They are performed here by Steven Devine on a double-manual harpsichord by Colin Booth (2000) after Fleischer (1710). The co-director of the Orchestra of the Age of Enlightenment, Devine also plays the harpsichord with The Gonzaga Band and London Baroque, and has been performing Bach’s Variations extensively in the UK.
The ‘Goldberg’ Variations begin with a highly embellished but unpretentious Aria, around which Bach builds a series of thirty variations that range from the high-spirited to the introspective. The epic scope of this work is not only a consequence of its length, but also of the enormous variety that is presented here – in terms of both style and mood – and of the way the whole piece is held together by the constant underlying theme of the opening Aria. The variations were very advanced for their time, looking forward to the much later ‘Diabelli’ Variations by Beethoven as well as the ‘Corelli’ Variations by Rachmaninoff.

The set of thirty variations was supposedly commissioned by Baron von Keiserling, the Russian ambassador to the Dresden court, to help him get through his many nights of insomnia, and named after the baron’s harpsichordist, who played them. However, as the set was published in 1741, and Goldberg was born in 1727, unless he was an exceptionally talented harpsichordist, the more likely explanation was that Bach wrote them for his son Wilhelm Friedemann to play, and perhaps donated a few to the young Goldberg.

Whatever the truth of its origins, there is no denying the exceptional excellence of the work. In the words of Steven Devine:  ‘This is a wonderful collection of dance movements, interspersed with passionate canons and virtuosic hand-crossings, all framed by a simple unpretentious Aria.’

“Rising star of both the keyboard and the conductor’s podium, Steven Devine follows his acclaimed Chandos recording of Purcell’s Dido and Aeneas with this fine interpretation of the Goldberg Variations. He brings a scholarly authority to this pillar of the repertoire, offering in his sleeve notes many insights into Bach’s thinking behind the 30 variations, an authority he matches with a masterly technique at the keyboard, turning this into a bravura display of the harpsichordist’s art. Highly recommended.” The Guardian, June 2011

“a deeply inner sense of expansiveness in Steven Devine’s interpretation makes his performance ..expressive and satisfying. Devine gives the impression of always having the room he needs to allow the music, its ornamentation and its sometimes devilish figuration to breath comfortably. Though not so stately and sedate as Gustav Leonhardt or as viscerally brilliant as Pierre Hantaï, Devine has the technique, the imagination and the mastery of period style to give a thoroughly satisfying performance.

In the Adagio, Var 25, Devine is more nuanced, sculpting the melodic figures over an occasionally rolled or slightly staggered accompaniment, which helps thin and vary the texture.

Illusionism is the key to the harpsichord and, while Devine’s double-manual instrument is warmer across its various registration possibilities, he manages to create a more turbulent and brassy sound in the shaking chord figures of Var 29.

This is crowded territory and only getting more crowded. Mere virtuosity, among harpsichordists, is no longer adequate. Devine’s reading is worthy of consideration alongside other distinguished recent traversals, including that of Richard Egarr.” Gramophone Magazine, June 2011

“… Performed on a double-manual instrument by Colin Booth (after a single-manual by Fleischer, 1710), the performer’s craft and flair affords the ‘Goldberg’s a sense of lyricism that is rarely heard. Most renowned for being the harpsichordist of the Orchestra of the Age of Enlightenment, Steven Devine’s weave of the contrapuntal lines accounts for some of this recording’s charm; in addition to his crisp ornamentation and variety of touch, this makes for truly addictive listening. The general pulse changes very little from movement to movement, but born out of this is a sense of organic progression that elegantly unifies the thirty variations and polar arias. It truly is a significant feat to have made such a unique recording given that this work has been so widely recorded. Coupled with precise sleeve notes, this is the scholars’ choice.” Musica Antiqua – January 2012